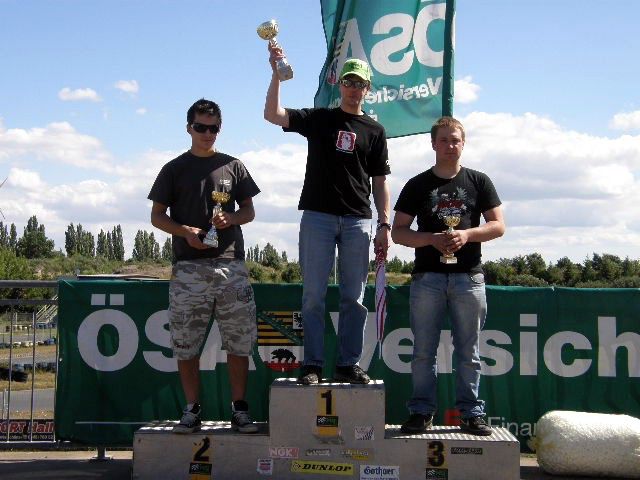 Last Sunday the second of four events of the RH-Scooter Cup 2010 took place on the Harzring in great weather.

Since I have an Easter at the first event of the cup 1st and 2nd place, I wanted to place myself in the top 3 this time too! This time a different route variant was driven, which was a lot of fun.

The morning training was due to new parts Scooter Center and the Sava tires very good. I was able to do it with exactly 7/100 sec. Behind Philip Hasemann secure starting position 2 of 17 drivers!

After a lunch break, the first race started straight away. The start of the first race didn't go that well, and since some drivers always think that the race will be won in the first corner J, I was only in 4th place after the start. It then took me some time to overtake Philip Hasemann and took the lead. Unfortunately

One lap later in a right turn my front wheel slipped away and I fell.

Fortunately, nothing broke either with me or the scooter and I was able to resume the race in 8th place. With good lap times (Fastest race lap) I was able to overtake Oktawian Jezierski shortly before the finish, and thus even finished second behind Philip Hasemann!

The second race in the afternoon started just like the first for me - again in fourth place after the start. But then I was able to overtake my competitors again and take the lead. This time I was able to pull out a small lead immediately, so that I won this race ahead of Philip and Oktawian.

In the overall ranking of the RH-Scooter Cup, I am now on the with 90 points first place.
The next two runs will take place from October 8th to 10.10th. at the Intermot in Cologne !!! 3rd round of the EST Championship 2022 at the Harz-Ring