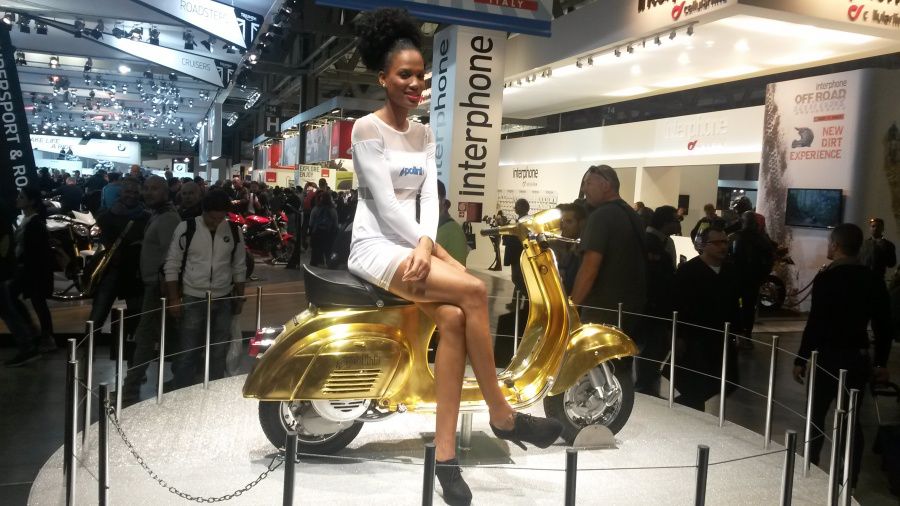 Scooter Center was at EICMA for you

Italy, country of birth of Vespa and Lambretta, offers an international trade fair for everything to do with two-wheelers in Milan every year - the EICMA.

We visited the fair for you and collected a few impressions: Polini shines in the truest sense of the word with a Vespa Primavera clad in 24kt. and a cylinder with control unit for the new Vespa Sprint and Primavera. So suitable for the air-cooled Piaggio LEM and HE engines. Malossi expands the product range around the T-Max and Iron Max 530. About the new 136 MHR for the Vespa Smallframes we have you already informed. At LML, the LML Star can be admired in several color variants, some of which can polarize optically.

In the formerly licensed buildings of the Vespa PX, 125 and 150 four-stroke engines and a variator now provide propulsion.

The LML Star models from 125cc to 200cc will continue to be offered in parallel with a four-speed manual transmission. Also known as the Vespa PK Smallframe comes as Star50 with variomatic drive from LML.

The Indian manufacturer has upgraded the small Star 50 with a (PX) handlebar borrowed from the big Star models and a disc brake at the front. We found interesting news at Pinasco.

For a long time it was rumored whether this crankshaft would even exist. 62mm stroke is a lot of stroke for a rotary valve crankshaft.

Here Pinasco must have dug deep into its bag of tricks to make the notorious crankshaft twist-proof and the connecting rod stable enough. Together with the 70,4mm Pinasco Super Sport cylinder, the result is a proud 241ccm. Despite the outdated design of the overcurrent channels of the 250 Super Sport,
this combination could provide a very impressive torque in the lower and middle speed range.

Pinasco has given the 225er Racing a new design of the overcurrent channels. The new motor housings for the Vespa are very nice Largeframe Models.

Pinasco shows four variants of the motor housing. The 125 and 200 each as rotary valve and membrane version.

All variants offer the option of using an electric starter and separate lubrication.

With the 125 motor housings, the silent blocks of the 200 are also used on the motor traverse. What is striking is the large amount of material applied in the area of ​​the overflow channels and in the inlet area.

Almost every tuning cylinder can be adjusted here with almost no restrictions.

For very extreme conversions, the housing offers a lot of meat in the inlet area.

At the time when huge inlets were still required, material was often welded onto the gearbox side. The 125 mm rotary valve variant is also prepared for the 17 mm wide crankshaft of the 200 mm engines.

This supports the use of the announced Parmakit cylinders for the 125cc engines with 195ccm and 205ccm.

The inlet area of ​​the housing with rotary valve is very generous. The main shaft bearing seat has been reinforced. The alternator bearing is taken over from the Vespa T5. The shock absorber eye has been reinforced. For the 225cc cylinder with direct inlet, Pinasco supplies a plate to close the housing opening.
Nice detail, the diaphragm intake and the locking plate from Pinasco fit on the cylinder as well as on the engine housing. The repair kit for the primary is reinforced on the back. Unfortunately not suitable for XL2 couplings. In addition to the 121ccm and a new version of the 102ccm variant, a cylinder with 130ccm and relatively large channel surfaces can also be seen. We look forward to the coming season in which we have many new ones Roller tuning parts acan offer. We are very excited about the first Pinasco engines.