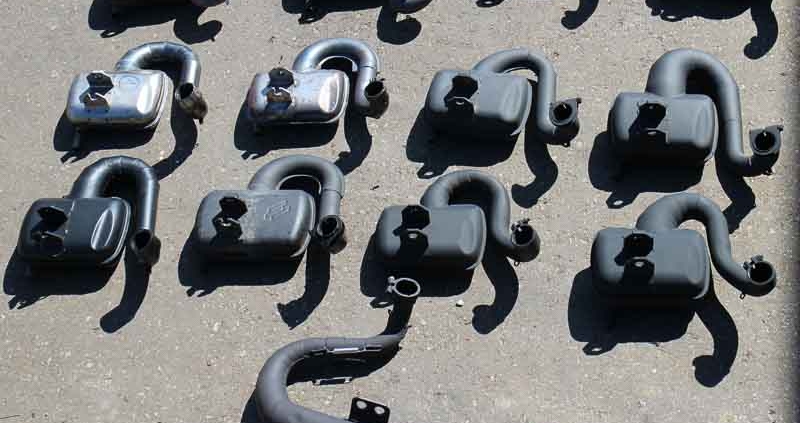 Boris Goldberg, in collaboration with MMW Racing, commissioned the very informative English online magazine ScooterLab.uk (SLUK for short) carried out a very elaborate exhaust test für die Vespa PX200 Models made. The focus of the test was on the now very popular box exhaust systems. This means exhaust systems that are more or less similar to the original exhaust in optics and sound, but offer a significantly better performance than, for example, the BGM BigBox Touring or Polini Box.

In order to make the results available to all readers, here is an excerpt of the most interesting tests.
In general, two different engines were tested: 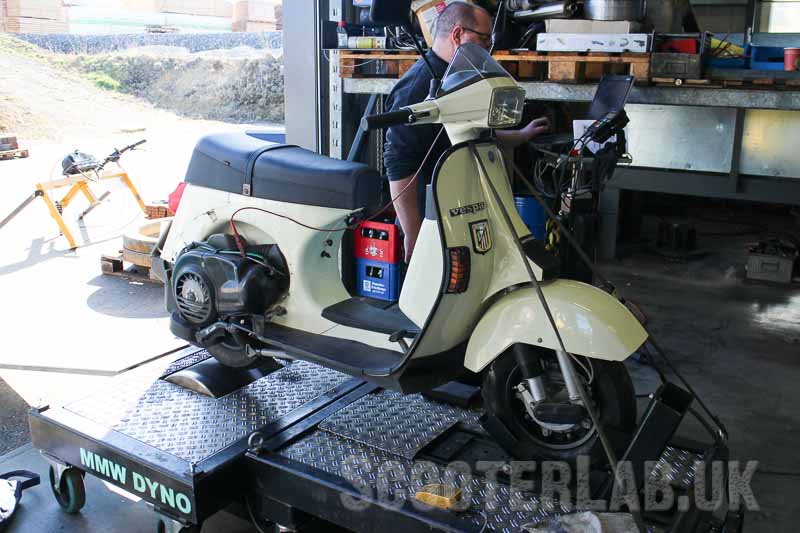 The original PX200 engine is designed as a throttle engine. As a result, it offers a lot of torque with a flat power curve.
Due to the short control angle and small flushing areas, the engine cannot be operated sensibly with a classic racing exhaust. The torque loss in the lower range is so great that it can lead to problems with the gear connection from third to fourth gear. At the switching speed, the engine falls exactly into the range where the racing exhaust has significantly less power than the standard exhaust. Under unfavorable circumstances, the engine then literally starves to death in fourth gear and does not go any faster than in third gear.
In addition to the optical and acoustic inconspicuousness, this is one reason why the box exhaust systems have become so popular. With almost the same performance as a 'real' racing exhaust, these offer a significantly more linear performance curve without any dips. Thus, the engine with a box exhaust is usually much more harmonious and relaxed to drive.

The Polini Box and the Big Box Touring are a prime example of how a good exhaust can help a production engine get going.
When developing their exhaust, Polini has based itself very closely on the Big Box Touring, which was previously on the market.
On the original engine, the BigBox Touring is clearly ahead in terms of torque and pulling power: 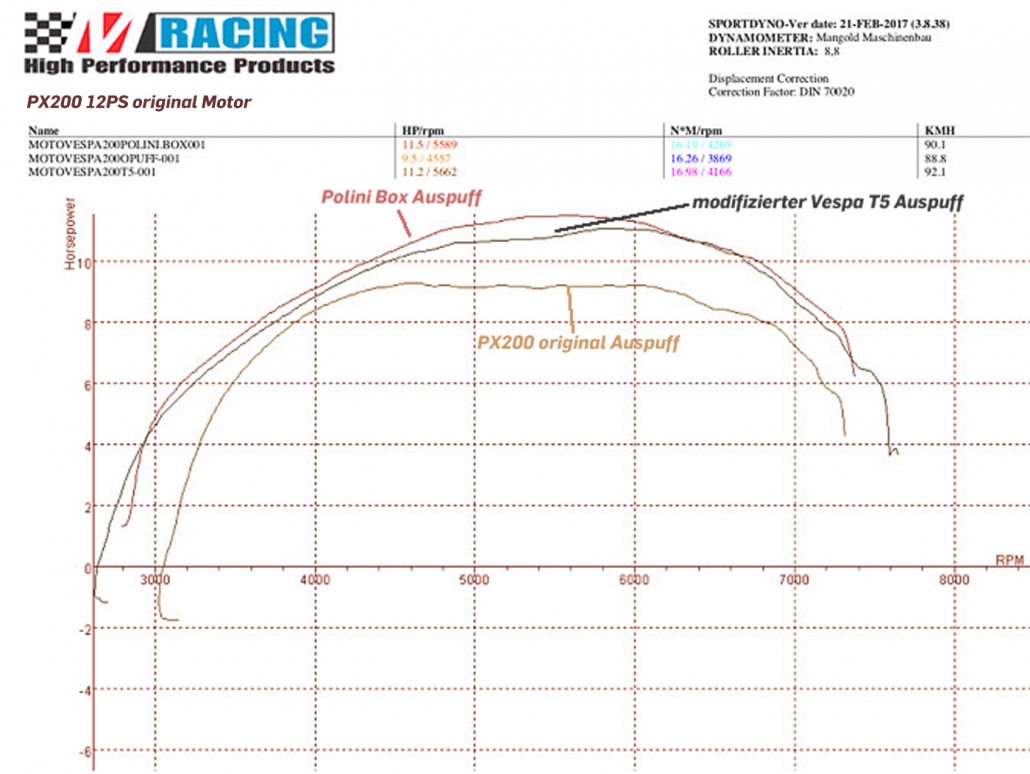 The performance curve of the original Piaggio PX200 exhaust is always used as a reference. In addition, a not for sale exotic was stored in the diagram (an exhaust of the special model PX125 T5, which in turn was provided with an exhaust manifold of the PX200).
The Polini Box runs very harmoniously on the series engine. It broadens the usable speed range and increases the available torque and power quite considerably.
Compare the lower yellow curve of the original exhaust with the upper red curve. The engine speed is specified via the left / right axis and starts at 2800 rpm. The motor power is read over the vertical axis, the higher the curve, the higher the motor power at the given speed.
The original exhaust reaches 9,5 HP which is the normal rear wheel performance of a 12 HP Vespa. The 12 HP are measured in the factory on the crankshaft without the losses from the gearbox, tires, etc.
With the Polini Box you get the maximum here 11,5PS achieved, so already 2PS more than the standard exhaust. The absolute torque is identical to the standard exhaust. 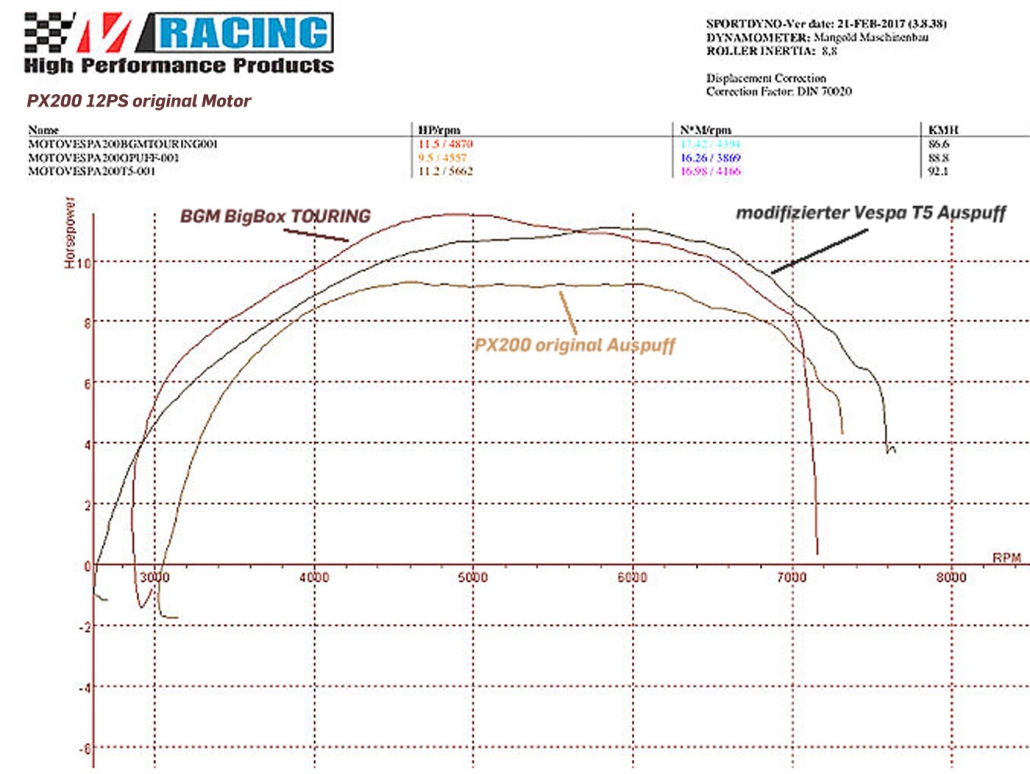 The BGM BigBox Touring runs much more powerfully on the series engine than the Polini. Up to approx. 5700 rpm, i.e. exactly in the speed range for which the original transmission was tuned, the BigBox Touring is well above the already good Polini Box. The slightly earlier end of engine speed at 7000rpm (Polini 7400rpm) is not relevant because the production engine in fourth gear (due to the normal driving resistance) only rotates up to 6000rpm anyway.
The BigBox Touring is therefore still unbeaten on an original engine when it comes to early, high torque with a very good bandwidth.
It gives the original engine, without any other changes, an increase of 2 hp. Compared to the Polini, it also increases the absolute torque by over 1Nm.
You can already feel this quite clearly while driving, because this higher torque extends over the wide speed range of 3000-5500rpm, which is very important for everyday use.

EXHAUST COMPARISON ON A POWERFUL ENGINE WITH MALOSSI 210 SPORT CYLINDER

The modified engine in this test is, despite the changed cylinder and crankshaft, still extremely tour-friendly and rock solid with, albeit very sporty, classic Vespa characteristics. The engine therefore develops at least the same performance as a standard engine from the lower speed range, with significantly better performance in the middle and upper speed range. 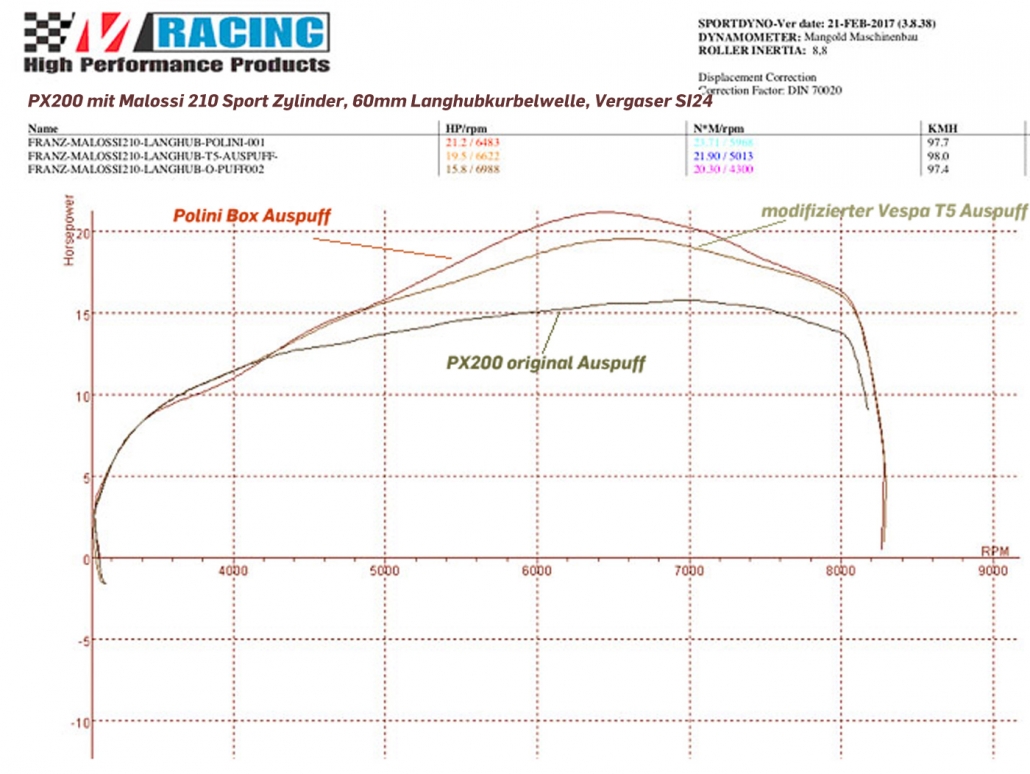 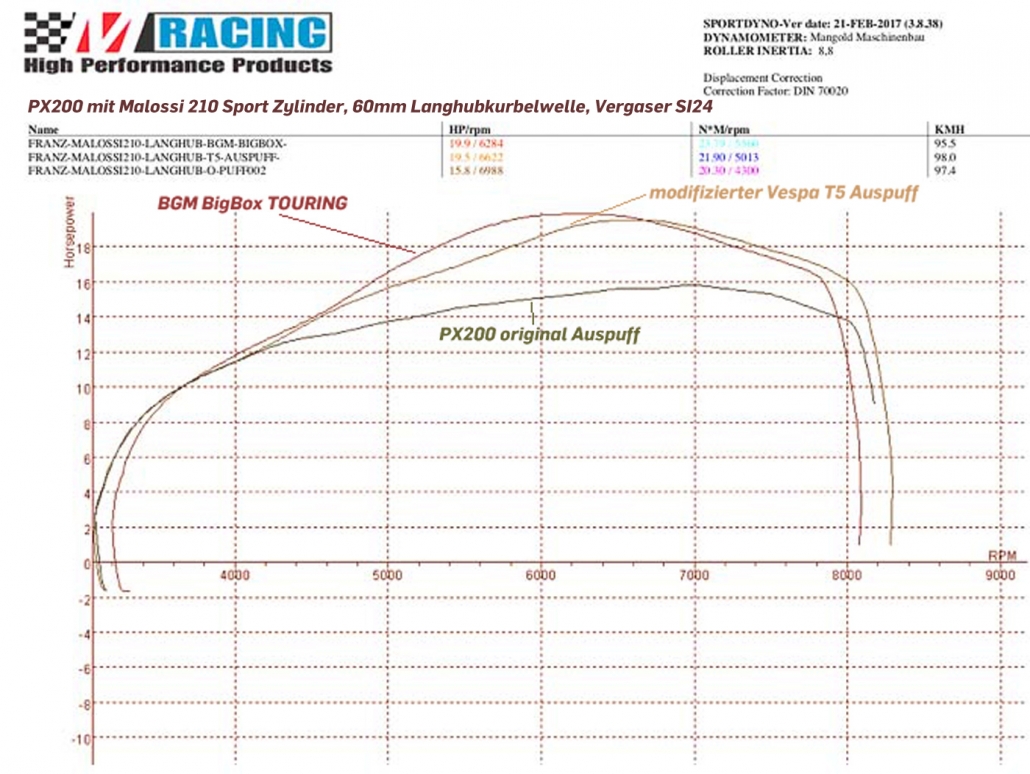 BGM BIGBOX TOURING ON PX200 ENGINE WITH MALOSSI 210CCM CYLINDER
The BGM BigBox Touring works perfectly on the Malossi Sport cylinder and offers a very high torque from idle. At 5000 rpm it is a whole horsepower stronger than the Polini Box and already reaches its performance peak at 6000 rpm. So the name says it all and every touring rider with the BigBox Touring is on the safe side when it comes to perfect drivability and thrust from the low revs. Compared to the standard exhaust, + 3,5Nm are extracted from the engine, all at a significantly lower speed level. If you are in a hurry, you can benefit from the wide speed range of the BBT, which still lets the engine turn easily up to over 7500 rpm with a lot of power on the rear wheel. That is already over 125km / h with a standard gearbox, with such a motor pulling a longer gear ratio without any problems. Fast motorway stretches are therefore not only not a problem despite the early onset of torque, they are also a lot of fun! 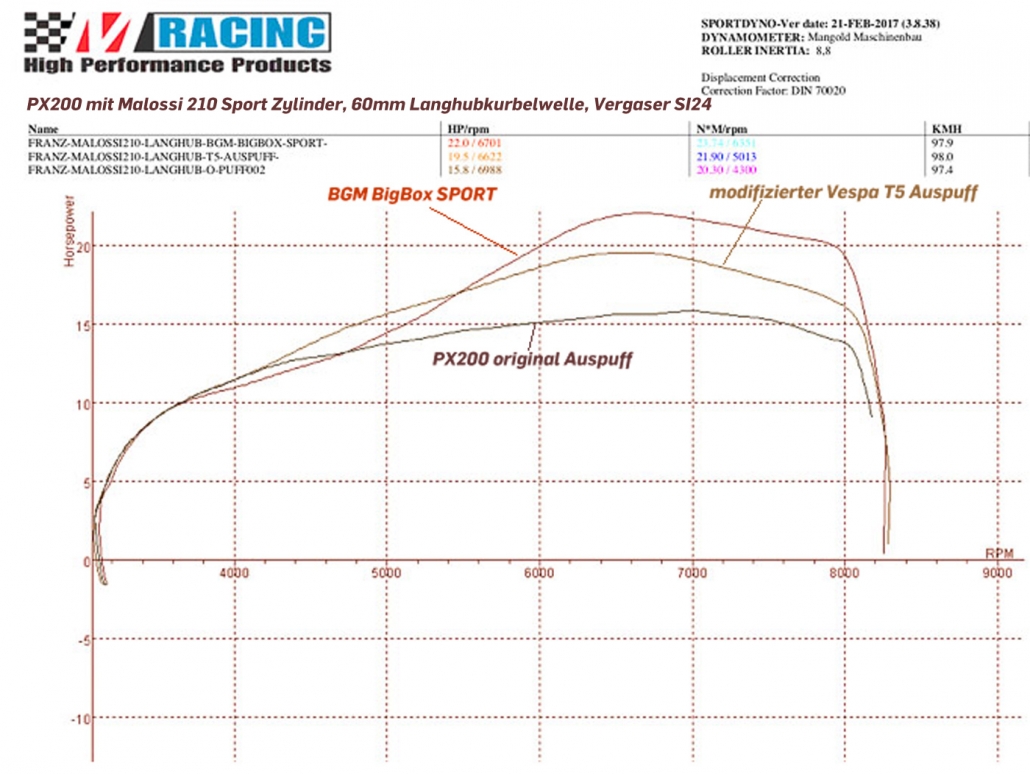 BGM BIGBOX SPORT ON PX200 ENGINE WITH MALOSSI 210CCM CYLINDER
Friends of the classic two-stroke characteristic will love the BGM BigBox Sport. If you want the resonance kick *, go a long way and at the same time expect a high level of performance, this is the place for you. On the Malossi Sport cylinder it is still a little underchallenged, but this is ideal for those who want to expand their engine concept. The Malossi Sport cylinder is ideally suited for this, as it offers the identical overcurrent layout as the much more powerful MHR brother.
The latter works best on a diaphragm-controlled inlet (or a heavily revised rotary valve inlet) with a large carburetor. Therefore, the MHR was not used as a basis in this test. However, increasing the control angle and enlarging the exhaust window quickly bring the Malossi Sport cylinder into very high performance regions. With the BBS, as the BigBox Sport is also called in short, engine outputs of well over 25 HP are then easily possible.
But even on an engine with a fairly conventional design, as used in this test, the BBS has the winner's crown in terms of top performance. The nice thing about it is that, despite the highest performance peak in the test field, it runs almost as powerfully as a standard exhaust up to approx. 5000 rpm. This is rather unusual for exhaust systems with high peak performance. From 5000 rpm, however, there is no stopping and the exhaust begins to fully charge. It then maintains the high peak power over a wide speed range. Perfect for chugging through the city inconspicuously and taking out the performance hammer in between times. As I said, the BigBox Sport works with more powerful engines and does not stop at a performance of over 30PS / 30NM (see here also the Performance diagrams in the online shop). In summary, one can say that the BBS is the proverbial wolf in sheep's clothing.

(* you can feel the turbo-like use of the exhaust) 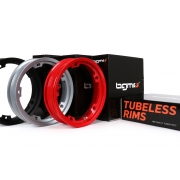 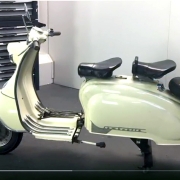 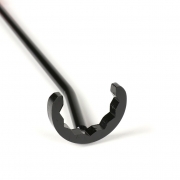 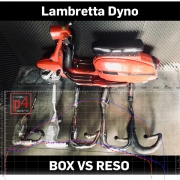