The Vespa PX models were never famous for their good brakes ...
Even Piaggio saw this and in 1998 gave the Vespa PX a modern brake update. A well-gripping and stable brake has been a series standard ever since.
From now on we offer you an inexpensive option to convert your old drum-braked PX to this modern technology!

All Vespa PX models built up to 1998 still have a drum brake on the front axle. It was only with the introduction of the PX Lusso in 1984 that it was improved and the fork and frame were reinforced, but it was never really possible to achieve proper braking power. In addition, there are the pitfalls of every drum brake, such as the unpredictable gifitge effect after a little downtime.

Anyone who has also given their engine a decent performance boost should not only think about a sensible and solid braking system for the TÜV. For many years, Grimeca was the top dog here with its retrofit disc brakes. However, due to the bankruptcy of Grimeca, this conversion option is no longer available.

An alternative would be original brake parts of the PX models from 1998. However, these have become almost unaffordable after the latest Piaggio prize round. The LML Star models, also known as Stella in the USA, are exactly the same model as the PX models, but made in India. The quality is on the same level as that of the Italian vehicles, an open secret is the fact that many of the switch scooter parts in the Italian vehicles now also come from Indian production.

The times when Far East production equates to poor quality can safely be put aside (even BMW has its engines for the F650 manufactured in China ...).

Due to our very good Indian supplier contacts, we can offer a very interesting alternative to the Grimeca disc brakes:

completely assembled, from the ongoing production of the LML models.
The whole thing at an unbeatable low price, absolutely convincing in terms of quality.
It's not for nothing that our fast tourer has Silver-fern project received such a complete fork as well as ours Racer project with over 30HP parts of the LML brake used!

The fork fits plug & play in all frames from 1984. These have a combined ignition / steering lock function. The older PX models have the ignition lock on the lamp cover above the speedometer, the fork can also be used here, but for this a milling has to be made for the lock cylinder in the steering tube. But this can also be done at home with a little basic tools such as a drill and file. The original fork is sufficient as a copy template.

The fork is currently available with a brake drum in the style of the old PX models, ie with a closed hub! Click here to have a look at the fork in our online shop!

In order to be able to operate the brake properly, a brake pump is required on the handlebar.
Grimeca took the detour via partial hydraulics, ie a brake pump controlled by the original brake cable that was attached to the fork tube. A solution that largely nullifies the huge advantages of a hydraulic brake ...
In principle, fully hydraulic control, without a mechanical brake cable, is always the better because it is more efficient and more comfortable.
There are different ways of assembling a brake pump.

This solution requires a little more tools, manual dexterity and possibly composure than the second variant, since here a small part of the original steering head has to be irrevocably removed. We already have in ours how this is done Documented the project diary of the Silver Fern. The following parts are required for this type of conversion:

The second solution is technically simpler because you only have to exchange parts.
The lower part of the handlebars on Vespa models built from 1998 onwards is used for this purpose. Both the original Vespa brake pump and the LML brake pump are available for this handlebar.
Both are identical in terms of their function, quality and appearance. Just not in the price ...

The following parts are required for this type of conversion (some alternatives): 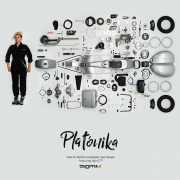 Platónika all parts - the ultimate wishlist