The Kytronic is a mini CDI module with huge performance! To the update 2016/2017

This CDI add-on is simply plugged onto the original CDI. Side hood off, rubber protection up, pull off plug and insert AddOn. Change pre-ignition. Finished.

By mere insertion So, do you have a CDI with 16 different ignition curves!
Underneath there is also a curve that the known one Vespatronic is very similar.

Clean idling as a Vespatronic

In the area of ​​the idle speed, the ignition angle is also greatly reduced and thus ensures easy and good starting behavior as well as very quiet idling. A feature that is unfortunately not inherent in the expensive Vespatronic and that often makes the engine rattle loudly when idling.

The only adjustment work necessary is to increase the pre-ignition to 24 ° -28 °, depending on the base engine and the degree of tuning.

The features of the Smart Booster module are:

Often does not work with Mitsubhi CDI replica.
We then recommend this against an original Ducati or
BGM CDI To deceive! 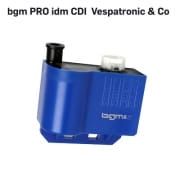 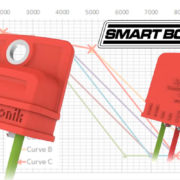