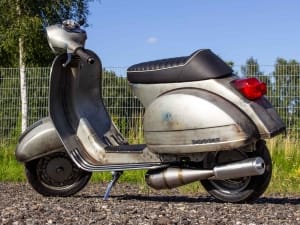 The powerful NEWLINE exhaust system series from Scooter and Service are 'handmade in Germany'. The boss of Scooter and Service, "Wool" (Wolfgang Riehn), has its headquarters in Bispingen near Hamburg, well-known far beyond the country's borders, for Vespa special parts, custom conversions and very strong but always everyday engine concepts.

Like no other, Wolle has focused on the Vespa segment, and over the years has repeatedly set new benchmarks in terms of optics, chassis, sheet metal work, engine technology and exhaust systems. Legendary is his 250N, powered by a water-cooled 250cc Husqvarna cylinder, based on a V50, with over 50PS (already in 2006!) And street legal.

Over the years, Wolle has repeatedly brought new, innovative exhaust developments onto the market, with each system being manufactured piece by piece in-house.

The development and production of the Newline series began more than 10 years ago and is still a real "bank" despite many new developments in this sector. The most outstanding feature is certainly the great wide performance range of the exhaust, both in terms of the intended use and in terms of power output. With a merit of the early diverging elbow, which is rare in other systems. Wolle has now added two further expansion stages to the very good Newline in order to make the exhaust systems even more suitable for everyday use. This resulted in the Newline 'Silent' series with unique interior insulation. 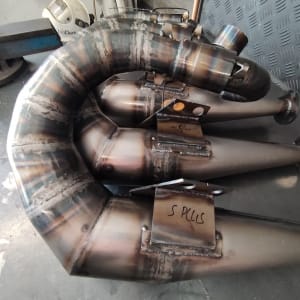 The Newline systems are designed to achieve a perfect balance of high and early torque, a wide speed range and the lowest possible noise development on engines with tuning cylinders (e.g. Malossi 210/221, Quattrini 232/244). The whole thing with full main stand suitability and high quality standards.

Due to the long development time, the exhaust is a real all-rounder. Whether under 180° exhaust control angle on a 'plugged' Quattrini 244, or on MHR221 with over 190° exhaust angle, the Newline always works. In our extensive series of tests with a Quattrini 252cc engine (Quattrini M244 cylinder + 62mm stroke king shaft), the Newline Standard (without insulation) was always at the forefront in terms of performance and torque. Its prime discipline is its high and, in direct comparison with other systems, relatively early torque. This makes it extremely easy to drive. The good power range, which follows the torque peak, is simply fun on the road due to the ease of turning and, above all, one thing: Instant.

At first glance, the Newline exhaust systems are virtually indistinguishable. However, the 'S' and S PLUS' version can be recognized by the spot welds in the middle segment area of ​​the exhaust (these are the attachment points for the inner insulation). What they all have in common is the massive exhaust hanger including doubled gusset plates of the retaining plate on the exhaust body. A construction for eternity. The quality of S&S systems is evident in many small details. The exhaust manifold is sealed with O-rings on both sides. A socket is also used on the outlet flange (diameter suitable for Malossi Sport/MHR cylinders, whether aluminum or steel flange). All Newline exhaust systems are not intended for use with a spare tire in favor of the option to fit a wide tire. Incidentally, all Newline systems that we carry in our shop are made for use with a center stand. These versions are significantly more complex (with more cones) than the slightly cheaper versions for vehicles without a center stand. However, the performance is identical. 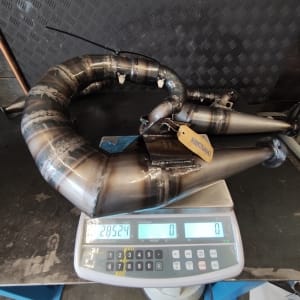 The conventional Newline is the first choice for everyone who wants to use the system with the highest performance potential from the Newline Trio. The insulation is only taken over by the screwed-on end damper. At the same time, it is the lightest version of all NEWLINE systems. If the volume is not overly important, but already drives or wants to drive an ambitious engine, e.g. on the Malossi MHR basis, the conventional Newline is the perfect choice.
The exhaust body with manifold (without silencer and bracket) weighs 2850 grams in the 'normal' version. 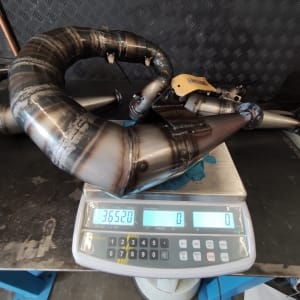 The Silent series is 800 grams heavier than the conventional Newline. The extra weight comes from the multi-wall construction and the internal insulation. High-temperature-resistant insulating material from the automotive sector is used here. The interior insulation insulates so effectively that the system meets the noise levels required by the TÜV (depending on the engine concept). The intake area on diaphragm controlled engines is often louder than the exhaust noise of the NEWLINE 'S'. The internal insulation also improves the torque increase in the lower speed range. The weight of the Newline 'S' (exhaust body with header but without muffler and bracket) is 3650 grams. 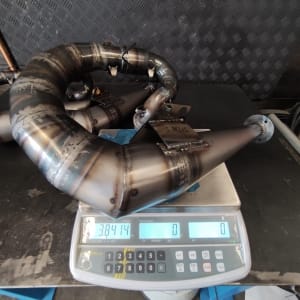 Maximum expansion stage of the silent concept. Even more complex interior insulation reduces the noise levels to a minimum. The S PLUS weighs just under 200 grams more than the Newline S or 1000 grams more than the conventional NEWLINE because even more insulation material is used here. The result is a really unbelievably dull and quiet exhaust, we could hardly believe it ourselves ...
The weight of the Newline 'S' (exhaust body with header but without muffler and bracket) is 3840 grams.

The Silent series is through the low noise levels Rightly very popular and offers a perfect basis for fast street engines with the option of official registration by TÜV / Dekra. Although this is always done individually (there are no reports), it is usually not a problem for years of construction before 1990 (power measurement and noise measurement required).

In Part 2, we focus on the noise levels and the performance curve of the three Newline systems on an unprocessed Malossi Sport 210.

A real work of art, in the literal sense of the word, is necessary until a real work of art of resonance exhaust is created from a boring sheet of metal. A 2-stroke exhaust is much more than a pipe that diverts the exhaust gases from the engine and makes them quieter.

2-stroke engines achieve their high performance / torque by charging through the exhaust.

Anyone who has ever driven their scooter without an exhaust will have noticed that there is a lot of power missing. The exhaust, if designed according to the resonance design, is both a 'vacuum cleaner' and an 'air pump' at the same time. Ideally, it extracts the exhaust gases until some of the fresh gases in the cylinder have already reached the exhaust. At the so-called resonance speed of the exhaust cylinder system, these fresh gases are 'pumped' back into the cylinder in the exhaust. There is now more fresh gas in the cylinder than would have been possible by simply sucking it in. The result is a high specific torque. Since engine power is a product of RPM and torque, if the high torque is also delivered at high RPM, then power will also be high. Unfortunately, the resonance range of an exhaust is limited. The higher the power, the narrower the speed range in which it is delivered.

On the other hand, a very wide speed range can be achieved if the power is selected to be rather average. Finding the perfect balancing act between the two extremes is a fine art. The effective resonance range is also dependent on the control angles of the cylinder. These are the main reasons why one and the same exhaust can produce very different results on different engines. The entire oscillation system must complement one another and be coordinated with one another.

This is associated with an immense expenditure of time, material and money. New variants are constantly being tried out and compared. Such periods often last for weeks or months. As an exhaust developer, you can seldom afford the luxury of designing an exhaust for a single specific engine. A successful exhaust has to work on many engine concepts with various cylinders including different control angles and components in order to be considered 'good' in the market.
Anyone who has already dealt with 2-stroke engines can understand what an enormously complex work is behind every 2-stroke exhaust system. The comparison to the construction of a musical instrument (e.g. a trumpet) is not at all exaggerated. With both, all dimensions, angles and diameters have to be exactly right in order to hold a perfectly sounding or working instrument in your hands.

This is followed by the high art of the exhaust builder school, in which the prototype (which is usually completely straight) is converted into a version laid in arches on the vehicle. For this purpose, so-called unwindings are made, usually with a cardboard model. Based on this, the sheets are cut out, wrapped and stapled together. After trying on the welding gauge, the final welding takes place as well as the many countless small work steps that lead to the finished end product. 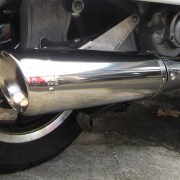 Vespa GTS exhaust from SPARK at a special price 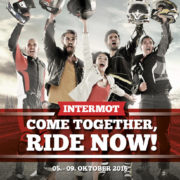 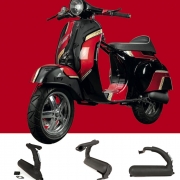 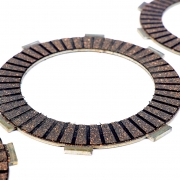 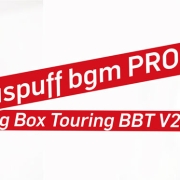