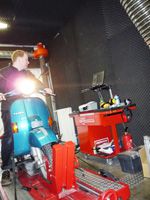 This week there is the final report on our conversion cylinder for the PX80. With this complete kit, each PX80 can easily be brought up to 125 cc displacement and benefit from the significantly lower insurance rates associated with it. All you have to do is change the cylinder including the piston and head, the short motor remains unopened!

Originally the 80ccm engine has about 5HP on the rear wheel.
The SCK conversion cylinder increases the performance by a whopping 60% to a remarkable 8PS, all with extreme reliability.

We are already above the level of a DR135, despite 10cc less displacement!
The diagram shows the direct comparison between the DR135 (red curve) and the new 125cc conversion cylinder.
In conjunction with a longer gear ratio (possible by simply replacing the clutch pinion), the top speed is also greatly improved. Another big plus point is the significantly cheaper insurance due to 125 cc displacement instead of 80 cc.
In addition, with a vehicle that has been converted to 125cm, you are not only more confident and cheaper on the road, the consumption is also usually cheaper because the significantly higher torque means that you no longer have to constantly drive at full throttle in order not to represent a traffic obstacle.
Something that may only become apparent at second glance is the significantly improved resale value of the vehicle. Holders of a car driver's license, if it was issued before April 01.04.1980st, 125, are able to drive motorized two-wheelers up to XNUMXccm without having to pass an extra test.
As a result, the market value of the 80cc vehicles specially designed for the German market was reduced substantially overnight. Anyone who has the appropriate driving license will use a more powerful 125cc vehicle than a weaker 80cc drive.
The conversion will make the vehicle much more attractive for a possible sale.
All in all, the cylinder purchase pays for itself quite quickly.

Two vehicles equipped with the conversion cylinder were on the road for several thousand kilometers without problems or breakdowns in 2011. The drivers are very satisfied with the performance and the low consumption.
We will test a few more optimizations during the week, especially with regard to performance, and then give our GO.

Here is a direct comparison between an original PX80 with SITO Plus sports exhaust (blue curve) and our 125cc conversion cylinder with original exhaust (red curve): 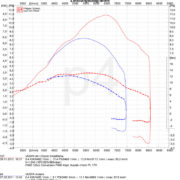 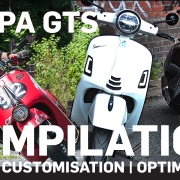 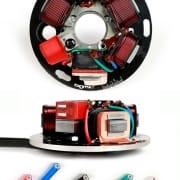