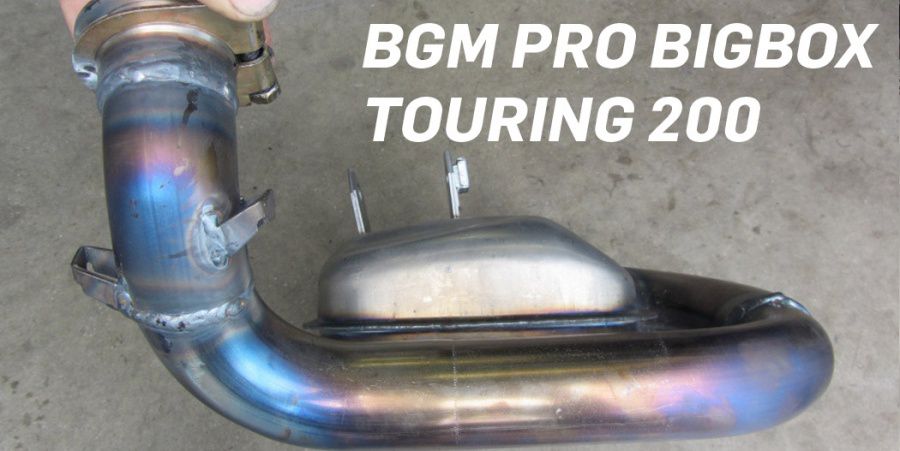 Today we have the first Manufacturing sample the BigBox Touring for the 200 Vespa PX engines.

The normal process of a sample test includes, in addition to evaluating the appearance and fit, runs on ours Scooter Center P4 dynamometer.

As we did in an earlier one Contributions to this Vespa exhaust have already noted, the BigBox Touring is significantly more delicate in the manifold area than its big sister, the BigBox Sport. Without her black, heat-resistant garment the BigBox Touring looks a bit bare. But we also attach great importance to taking a close look at all the connection points without a “top layer” during a sample test. One of the first tests was assembly on one Vespa VLB (Sprint). In combination with a 200 PX motor, such conversions often lead to space problems. Especially in the area of ​​the main stand, especially the “U's” and the tabs for the stand springs. The stand feet may also collide with the manifold, depending on the routing of the exhaust system.

With the BigBox Touring, we made sure that these bottlenecks are sensibly defused. Even with vehicles with the only two-spring system on the main stand that has been introduced for the German market fits the BigBox and the stand feet are at a safe distance to the hot manifold. The BigBox Touring Just like its big sister, it is equipped with a solid clamp and additional holders for exhaust springs.

If you want to be on the safe side at this point, then this is ours Retaining plate with 2 exhaust springs exactly the right accessories for your BigBox. If we like the look, workmanship and fit, then it goes to them Performance measurements.

Our first "test victim" is a Cast iron Polini with 207ccm, SI24 carburetor on a standard Vespa PX200 engine. Early torque for everyday use and touring

When developing the BigBox Touring, we made sure that the possible torque is available very early and that the exhaust has a lot of pressure from the low revs.

The earlier and more homogeneously a motor delivers its torque, the more pleasant it is Everyday driving. With the BigBox Touring, you can already step in on our test engine with the good, old gray cast iron Polini 3900rpm over 18Nm Forward. Converted to fourth gear, that means a pleasant one Cruising at 50km / h with a very good potential to accelerate through to the top speed.

Depending on which engine you are using the BigBox Touring on, a longer primary reduction may be required makes perfect sense can be used to drive a little more revs at the same cruising speed. The easiest way to extend the reduction is with a clutch pinion. That bgm clutch pinion for the Cosa type clutches or a durable solution like ours bgm Superstrong clutch are good and loyal companions here. Due to the longer reduction, up to to 5km / h more top speed at the same speed is possible. Let's test it - the BigBox Touring is waiting for you!

If you would like to know what the Vespa touring exhaust bgm PRO BigBox Touring on your personal motor, then just send us an appointment request to pruefstand@scooter-center.com.

Our test sample of the bgm BigBox is on ours for you Test bench ready for testing.