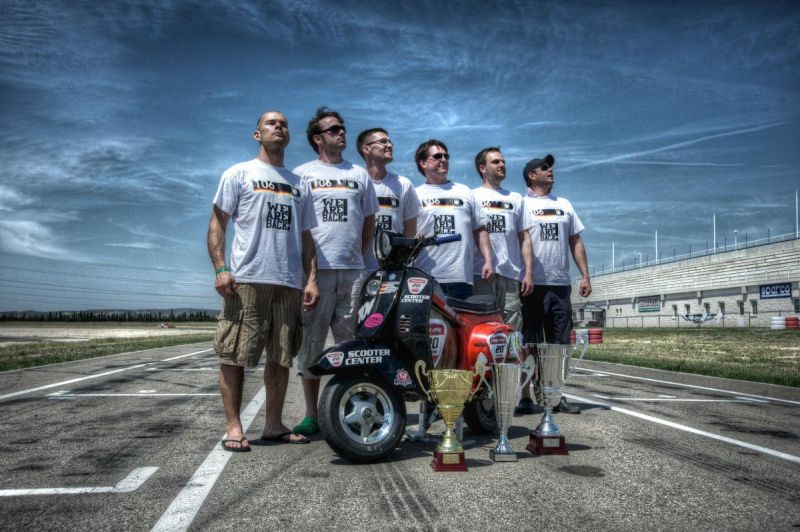 2012 was a special year because this year the ESC Endurance started for the first time. In this endurance championship, in contrast to the regular ESC championship, there are no sprint races against each other, but teams drive up to 6 hours at a time to win. That Scooter Center Cologne sent the GSF SCK Endurance Team (Andreas Putz, Michael 'maniac' Betz) into the race, which already earned its spurs at the 24 hour race in Spain and achieved a splendid triple victory there (fastest race lap, class win, overall win). The first endurance run in Liedolsheim as part of the Stoneheads 'Run'n'Race', in which the team was able to take first place without any major problems, went with correspondingly high expectations. After the endurance run in Wackersdorf had to be canceled due to poor weather conditions due to the 'cornering' of the pacemakers, the race at the Harzring, which was organized by Wotox SC, was on the agenda. The weather was mixed and we had a nasty take-off that catapulted us beyond the podium in terms of space. After a lot of plumbing work on the racing machine, the rpm scootering 'sheet metal fight' in Belleben was on the agenda, which despite a leaky head, leaky exhaust flange and a torn membrane was completed second. Blessed with these defects, after the body, the engine also deserved an overhaul, which had previously contested all races of the season including the 24h race without revision. With freshly revised work equipment, we then arrived at the season finale for the 'Holidays in Hungary', which was organized by GOA SC. At the beginning of the race still on a hard-fought first place, we lost valuable time due to a brake defect and a dented (wtf ??? diagnosis pending!) Spark plug. Equipped with a strategic will to win and with fantastic weather behind us, we secured second place in Hungary, which won us first place in the ESC Endurance Championship! At this point, many thanks to our guest drivers Benedikt Neuberger, Robert Leibfarth and Jens Fischer ... thank you guys, another job well done!

Step board sets -MAURO PASCOLI- premium quality for your Vespa

20 years Scooter Center - Part 1: In the beginning there was Quadrophenia
Nach oben scrollen