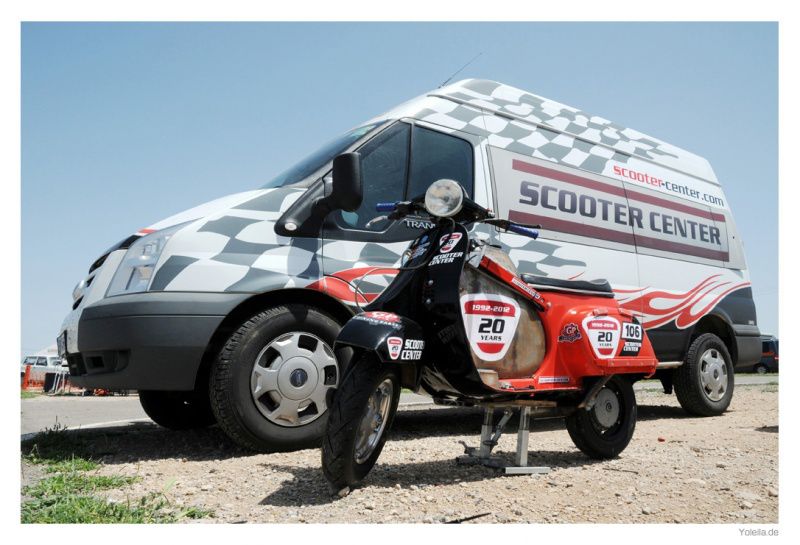 The SCK GSF Endurance Racing Team came to the 24-hour race in Zuera / Spain with exclusively top-class drivers from the ESC racing series. The driver squad, consisting of Andreas Putz, Robert Leibfarth, Christian Kachel, Jens Fischer, Michael Betz and team boss Andreas Bayer, already finished third overall and second in their class in Zuera last year. None of the team had dared to dream that this very good result could be increased again in view of the fact that the starting field had grown to 59 teams. The first place was secured in qualifying, which was also easily improved in the first hours of the race. However, this came to an abrupt end when a Vespatronic fan wheel sheared off after 2,5 hours, which also affected the ignition base plate, which had been specially converted for the xenon light. Another ignition base plate was converted and installed in record time, which, however, threw the team back to 45th place. Equipped with unbroken motivation, the team fought their way back to the front with superior lap times. However, when the podium was within reach again 5 hours after the start of the race, the next setback occurred: the brakes could not withstand the harsh pace, and even the brake caliper was irreparably damaged. After installing the fully prepared replacement brake, however, the team only found themselves in 32nd place, so the race to catch up started all over again. The game was to be repeated several times in the further course of the race, there was still oil loss on the rear wheel, a loose switching nipple, 2 broken vibrated fan wheel covers, a lost rear light, a loose clutch lever screw, a time penalty of 2 laps due to a rule violation and a planned pit stop with tire and change of brake pads. After daybreak, however, all of these setbacks were more than compensated for by the drivers who were all fast, so that the team was in first place for the last hours of the race without interruption. However, it was clear to everyone that the last 15 lap lead could be gone very quickly if a major defect occurred. So the tension was on the boiling point when the team observed that the pilot stopped next to the track shortly before the end of the race and did not continue! The seat was folded up, the side jaws opened, what had gone wrong again? In the end, it was now the third fan wheel cover that started to destroy the ignition and cause 10 penalty laps because of lost parts on the racetrack. However, the pilot deposited the completely destroyed cover with presence of mind next to the route and drove on for the remaining minutes without forced cooling ... successfully! After 24 hours, 926 laps and 1574 kilometers of racing, the time had come, the team had set the fastest lap time, the class win in the Smallframe Proto class and also the overall victory over all classes! This resulted in huge trophies that were not really easy to transport and an extensive champagne shower ... that's the way it should be! At this point, many thanks again to everyone who supported us with spare parts and active help! Also a huge thank you to the race organization, who can organize such a mammoth project so perfectly ... madness. And last but not least, many thanks to the team, which, despite all adversities, always stuck together and showed an absolute will to win in every situation!

Muchas gracias, see you next year!