As in 2008 that loaded SCOOTER CENTER to the Max Speed ​​Festival. A scooter racing event with a very special flair: because modern automatic scooters start together with the classic Vespa and Lambretta scooters on the 500 meters long distance. Both scenes looked interested and with great respect in the other camp.

Unlike other events, the MSF is not about sprinting / accelerating, but primarily about that Final speed after 500 meters.

The first teams and visitors arrived at Meinerzhagen Airport at around 9:00 am. It didn't take long and the whole meadow along the 1.200-meter-long runway looked like a huge pit lane. Visitors off Germany, Italy, France, the Netherlands, Austria and England did not want to miss this very special motorsport event.

From 11:00 to 13:00 they sprinted as hard as they could. On the circuit there was really no time keeping and the one or the other fight was held. The rush to the free SCOOTER CENTER dynamometer was at least as long as the queues for the fries and sausage stands during the lunch break. But the wait is worth it and they reasonable prices, cool RED BULL and delicious snacks Word got around quickly. Especially from 13:00 - 14:30 it was then Chill, fix and eat announced, because the engines had to turn off during the break.

Punctually at 14:30 p.m., the first racing scooters raced down the track again and one record after the other was broken until the early evening.

The team also won this year SCOOTER CENTER again with the SCK - Piaggio ZIP. With a top speed of 169,4 km/h shot driver Torsten Wengeler on the ZIP through the RED BULL archway.

We are sure that next year the 170km/h be cracked!

The entire SCOOTER CENTER The team would like to take this opportunity to thank for the problem-free process and the friendly guests at the Max Speed ​​Festival.
We look forward to next year and see you in February at the SCOOTERSHOW in Cologne http://www.scootershow.de

Photos can be found in the Classic Gallery and Automatic gallery 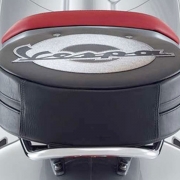 Rolling in in Munich