After our bgm Pro Clubman has already shown what he can do on TS1 cylinders in Part 1 and Part 2, we are going to take our bgm test bike today.

The engine consists of a plugged in bgm Pro RT225 cylinder, bgm Pro crankshaft 60mm stroke and 30 mm carburettor. The cylinder is the current series version with a CNC cylinder head.

The bgm PRO Clubman, Ancillotti von Sito and the JL KRP3 are available as test canids.

As a first comparison here bgm Pro Clubman against Sito As with the TS1 cylinders, the Clubman's superiority in performance and, above all, torque is noticeable. Up to over 7000 rpm, the Clubman is ahead with 1Ps and 2Nm. Over the speed range of 4500rpm -8500rpm (!) The bgm Pro Clubman takes over 1Ps from the JL Road. Even the short torque peak of the JL can no longer really score.

All in all one can say that the bgm Pro Clubman delivers a pretty coherent performance on a plugged-in bgm RT225 cylinder. The concept works particularly well in the area of ​​suitability for everyday use and torque behavior - without complex processing and diaphragm. 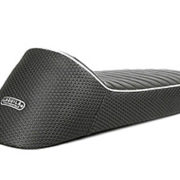 SHE IS THERE! - SCK Ancillotti for Vespa PX

On the test bench Lambretta with Mugello 186. In the test: bgm Clubman, JL KRP3, Style63